If you are interested in Hex Flower design, this neat on-line tool to make customizable Hex Flowers may be of interest to you:

Background – what’s a Hex Flower anywho? A Hex Flower (HF) is like a random table, but with a memory.

This is just a quick Hex Flower update. 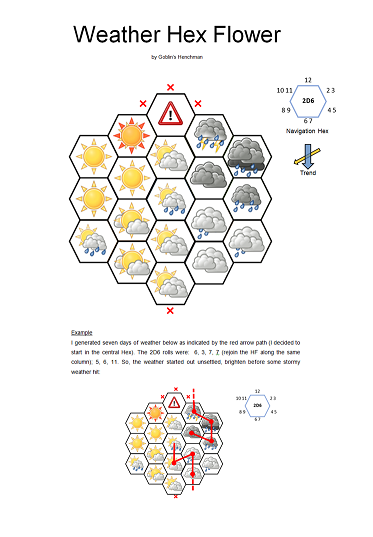 Background – what’s a Hex Flower anywho? A Hex Flower (HF) is like a random table, but with a memory.

I posted a little while ago about using QR codes for random room encounters.

However, I thought people might also like to just have/read the rooms (without reliance on the QR code links), so here they are: 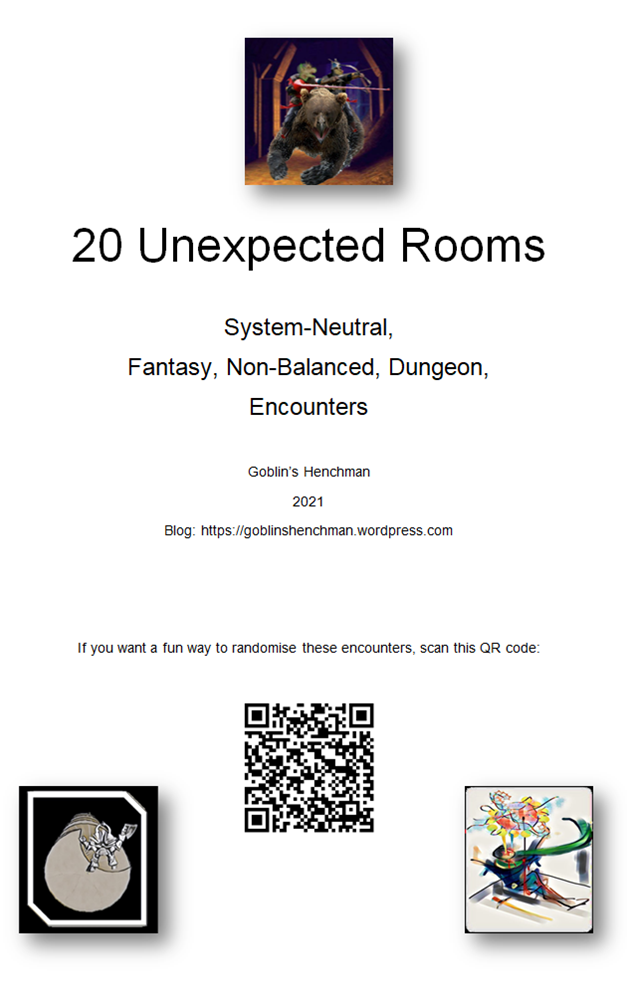 Location appearance – The room is very large and almost perfectly spherical with a suspended jetty that runs around the circumference of the room. The bottom half of the sphere is filled with cloudy mineral rich water. A thick column rises from the base of the sphere, reaching out of the water and joins up with the top of the sphere. Basically, it looks like the column supports the ceiling. A red door is painted on the column about 6 feet above the water level.

Exits – None except the secret exit.

Taste/smells – The water gives off a smell like freshly cut grass and is not drinkable.

Sounds – Occasional ‘plips’ as condensation falls from the ceiling above.

Contents – The room is otherwise unfurnished/empty.

Inhabitants – Almost imperceptibly, several giant translucent jellyfish float suspended in the cloudy water. They have stinging tentacles and will attempt to wrap and ingest swimmers (treat as a gelatinous cube or a slime).

Dynamic elements – Below water level, near the base of the column, there is an opening in the column that is hard to see due to the murky water. Entering the opening and swimming up reveals that the column is hollow like a straw and it contains a ladder that leads to a room above. The red door painted on the column lines up with the opening below.

Treasure – A few worthless items have sunken to the bottom of the pool. From above it is hard to tell what these items are.

Location appearance – A very large basaltic cavern is bisected by a lava stream.

Exits – Over the lava stream there is a large external opening through which the sky can be seen. There may be other exits but these are screened by a heat haze.

Contents – On the opposite side of the lava stream there are some deep pits dug in the basaltic rock. They are located quite close to the lava stream and the sides are red hot. Pools of molten gold are contained within the pits. The occasional gem bubbles to the surface.

Inhabitants – If there are any inhabitants, they are presently away. Large scratches, possibly from a clawed foot can be found about the cavern. Very little detritus can be found in this place, possibly this is discarded into the lava stream.

Dynamic elements – Heat haze above the lava stream impedes the view across the cavern, and the super-hot areas near the lava stream make travel difficult. Tarry too long here and the inhabitant(s) may return.

Treasure – A King’s ransom worth of gold coins is melted in the pits. Gems worth the same sit at the bottom of the molten pools, but some occasionally rise to the surface.

Contents – Extending from one wall is a crystal maze that is 10 x 10 feet and about a foot tall. The top of the maze is sealed by the same hard transparent crystal-like material. The crystal material is impervious to magic and force.

In the middle of the maze is a diamond the size of a pigeon’s egg.

There appear to be two openings in the maze, a small round hole in the floor in one corner and a eight inch high door at the front of the maze with a bolt drawn across it. Oddly, there also appears to be a small hopper of grain that would normally feed grain into one corner of the maze through a grate, but the hopper has become clogged by some of the larger grains.

Dynamic elements – The mouse will pop out of it’s hole if anyone is messing about with the maze. It will beg for food by the clogged hopper. If the PCs oblige, it will move the diamond nearer and nearer the small door in exchange for more food. The mouse will never move the diamond fully out of the maze. If anyone reaches through the small door (e.g. to grab the diamond), they appear in the middle of the maze and are about an inch tall. The mouse is hungry and in need of protein. In respect of the inch high PC, treat the hunting mouse like a T-Rex. Exiting through the small door restores the PC to normal size.

I sense a puzzle trap in this: