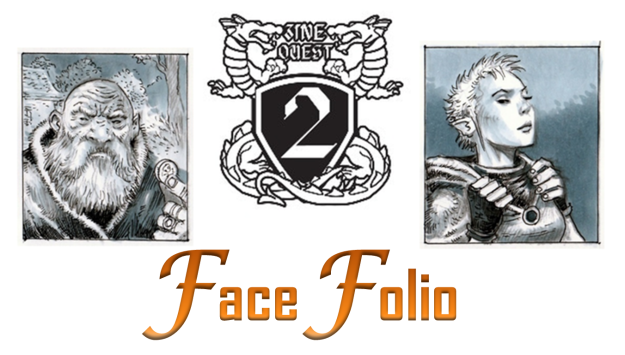 >> Preview and get notifications of when the Kickstarter goes live here <<

Very soon this Kickstarter for Zine Quest2 is going to go live.

About the Kickstarter:
This is a simple project with a simple goal: to provide 100 fantasy portraits for use in your tabletop role-playing games. Referees are always on the lookout for NPC faces to show their players and players are always looking for portraits for their character sheets. This project aims to meet that need.

The portraits will be organized into the following sets:

Each set will contain ten portraits, half male and half female. With the exception of the human nobles and peasants, the portraits will be a spread of adventuring classes.

The Zine will have a simple elegant layout with 10 portraits per two-page spread, and organized in the above groups. There will be no blocks of text and no fluff to get in the way. That way this book can be used right at the table, as and when needed, for example when the referee suddenly needs an NPC to drop into the game.

The idea is also to provide initiative trackers like these which can be printed out for each portrait:

Tracker folded and hung from a DM screen

Tracker prior to folding

Tracker folded into a peak shape and placed on the table

Well that’s the crux of it.

A little while ago I posted about retrofitting the 1e Surprise Mechanic as a combat system, and teased (blog link) about making a RPG system from this. So here goes:

^^ Despite the name, I don’t appear to have the wherewithal to remove the boarder around the above image ^^

1st level & advancement
At first level the PC gets 3 points, where 1 point must be used in S(kill) & R(esilience). So 1 free point to spend on the any stat.

There is no limit on the stats except, A(mour) may not exceed 3

Players decided if they have done enough to level up.

Combat
Player rolls a D6 and if it is equal or lower than their PC’s S(kill), they hit, and do D(amage) equal to the die roll. A roll above S(kill) is a fail.

D(amage) is reduced by opponent’s A(mour); but never lower than 1.

Magic
PC can cast a number of successful spells per day equal to M(agic).

Spell is successful if the D6 roll is equal or lower than M(agic). A roll above M(agic) is a fail.

Damage done; and/or duration of spell; and/or number of opponents affected by the spell is equal to the (successful) die rolled.

Class & stat interactions
There are no classes per se; but as the PC becomes more specialize, this comes at a cost to the advancement of their other abilities.

So multi-classing is costly compared to a single specialization, and so is probably only worthwhile when the primary stat exceeds 6, and so further advancement in the primary stat is not effectively useful. Then again, improved R(esilience) is always at no cost.

Comments on monsters /opponents
A monster with 6S(kill) is a BEAST, like a dragon. So, each increment in a stat should be thought of like an exponential increase.

So, to put a marker down, here are some examples:

Comments on magic items
Plus weapons will distort the D6 game mechanic quickly, so in this system a +1 is a big modifier! So, probably best to imbue magic items with useful properties rather than simple pluses.

Final words
I’ve never really been interested in writing an RPG system (perhaps it shows), but I was prompted to bring this together after receiving a message to my podcast. Clearly, it’s rules light and would not suit power-gamers. What interested me, was how a simple mechanic (i.e. the Surprise Rule in 1e) could be used as the basis for a game. That is, one simple D6 roll determines the ‘hit’ and the ‘damage’ outcomes.

What do you think? It’s certainly not been play tested! If you try this system, I’d be interested to hear any feedback.

During my self-imposed blogging break over Christmas, I started an Anchor podcast (that doesn’t count as Blogging right?).

Anyway, I recently thought it would be neat to make a collaborative ‘Audio Dungeon’.

The idea being that people leave an audio message of 1 minute or less (preferably using the Anchor record feature) detailing something found in a fantasy dungeon (whatever that means to you), e.g. room, location, encounter, statue, fresco etc.

If you are interested you can find out more (and record a message) here:

Rules (for want of a better word):

If I get enough of these audio submissions, I’ll pull them together as a Creative Commons Audio Dungeon. I’m imagining a dungeon of audio ‘box text’ which people can them populate with their own encounters, perhaps from random tables.
At least one listener has pointed out that while this idea is fun in its own right, it might also be a helpful resource for anyone with a visual impairment/disability.

It’s been a little while since I updated and mentioned my Simple Excel mapper.

The mapper is PWYW on DriveThruRPG: https://www.drivethrurpg.com/product/282764/Simple-Excel-Mapper

Example
To show what this simple mapper can do, I thought I’d have a go at recreating the blank map in the classic 1e Dungeon Masters Guide (DMG): 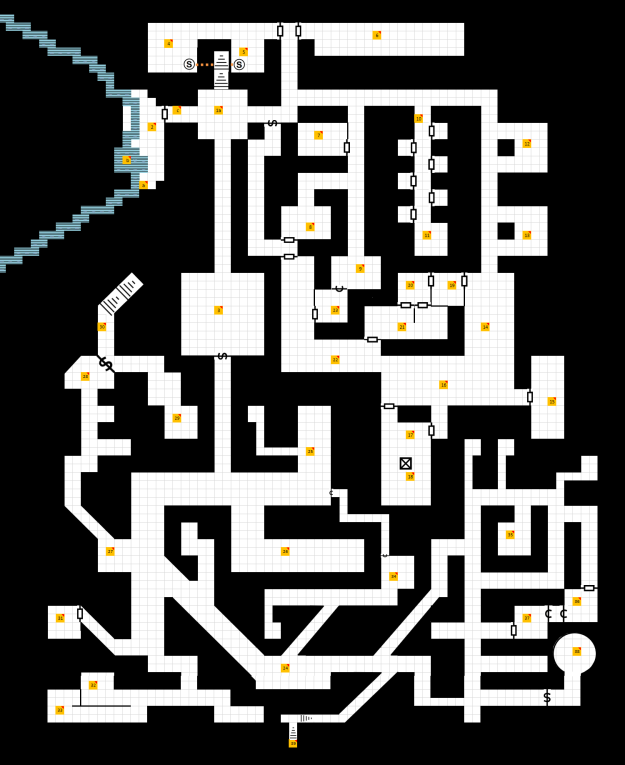 Here’s an example of a customisable popup:

Here are some icons you could add to the map:

Here’s a (oldish) demo video of the mapper:

Overview
Units are treated as single combatants, they have Unit Health (UH), Unit Attacks (UA) and Unit Damage (UD) per hit done. The units are largely a macro-version of the monster/troop within the unit.  The following is explained with reference to the following three reference units:

:: Unit Attacks (UA) of the unit is equal to UH divided by 10, and rounded to the nearest whole number and then multiplied by the troop type’s Number of Attacks (NOA):

:: Unit Damage (UD) per successful attack made is determined on a power scale, i.e.:

:: Treat combat as one unit fighting another, e.g. treat a unit of 105 humans fighting a unit of 20 centaurs as Unit 1 fighting Unit 2.

:: Wipeout rule – if a unit loses initiative and is whiped out in the first round, the wiped out unit still does half damage on their adversary

:: Defeat Morale – check unit morale if the unit suffers more UH damage than the other side

:: Decimation Morale – check unit morale if the unit lost more than 50% of their UH in one round

:: Defeat and Decimation Morale tests are independent of each other

Example 1:
Unit 1 attacks Unit 2 (in this scenario Unit 1 is lucky and wins initiative each round):

The humans lost the combat round taking the most UH damage, and lost more than 50% of their UH in a single round, and so need to take a Defeat Morale check and a Decimation Moral check. They pass, but is luck truly with them?

This time Unit 1 does not make both morale checks, and they flee for their lives.

While the human spearmen bravely seized initiative and destroyed the T-Rex, it was at a high cost. Indeed, despite winning the clash, they failed their Decimation Morale check (i.e. they lost more than 50% of the unit in one round) and so left the field believing they had done more than their fair share of the slaying in this battle.

In destroying the swarm of pesky humans, the T-Rex is very badly speared in hundreds of places. Even if it made its morale check, 3 UH does not qualify for a UA point (i.e. 3 divided by 10 (and rounded to the nearest whole number) x 3NOA is 0 UA). The hefty beast limps off the battle field, but not before chomping down on a few of the chewy humans.

Finally
I suspect that there are already some pretty good mass-combat rules out there. But, … I thought I’d have a go at my own (before getting cross-polinated by other people’s ideas) … you know, for the fun of it.

This is my contribution to this collaborative dungeon: http://www.msjx.org/2020/01/collabodungeon-01.html

:: East wall – holds a man-sized circular plate. The top half of the plate is polished brass and the bottom half has been coated in black enamel. In the middle of the plate is a rotatable arm. At the end of the arm is a small brass Sun sculpture that has a small pivoting cup behind it. The cup has traces of wax in it. The arm can be rotated 360 degrees, such that the Sun can be positioned anywhere around the circumference of the plate.

:: West wall – is painted black showing the stellar constellations. In the middle of the wall is a perfect sphere about a foot in diameter. Half of the sphere is inside the wall and the other half protrudes into the corridor. The sphere can be spun, and if spun it can be seen that half the sphere is white and the rest black.

:: Solution (spoilers!!) – a small lit candle must be place in the cup of the Sun arm and the ‘dial’ moved to the correct time of day (straight up is noon and straight down is midnight). The Moon sculpture must be rotated to show the present phase of the Moon (e.g. if the Moon is presently a Full Moon, the half sphere in the corridor must be rotated to show all white). The secret door will then open. The door will lock again when any of the above conditions cease to apply, e.g. the candle goes out or the time of day changes. The door has no opening mechanism on the inside.

Next time you’re stuck for a maze or cavern complex, look no further than the back of your Cheetos packet …

Two examples below made using an online generator:

1. Here’s the QR code for Expedition to the Barrier Peaks: 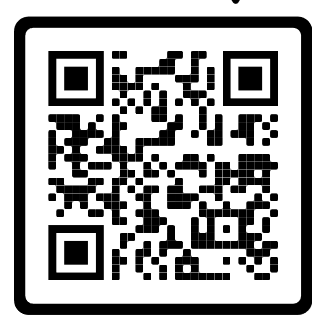